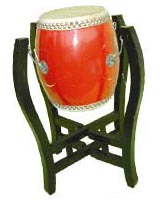 The dagu (Chinese bass drum) is an umbrella term for two kinds of Chinese drums in the Chinese orchestra, the huapengu - which is made in the shape of a flower pot - and the datanggu/ganggu, which has a broad base. The former is bright and pitched higher than the latter, while the latter is thick and strong. Both are equally used in the orchestra, but their differences are not really known to composers.

The dagu possesses a characteristically strong and expressive sound, which allows it to lead in many orchestra and ensemble works. Its wooden frames are also usually struck with wooden mallets, which produce clear, piercing sounds. This sound is unique to the dagu, and is very commonly used in native wind and percussion ensembles. A smaller cousin of the dagu, the xiaogu (small drum) - also known as the zhangu or xiaotanggu - is around six to seven inches in length, and is shaped and played just like the datanggu. The xiaogu is capable of producing solid yet elastic sounds, evoking images of war when struck harshly. Usually played alongside small cymbals and small gongs, the xiaogu is used to create a festive atmosphere with fast rhythms. These Chinese drums are usually played with wooden drumsticks. Check out the Hong Kong Chinese Orchestra's introductory videos to assorted Chinese percussion here: