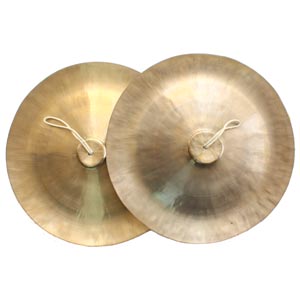 The Chinese were known for being good with metalwork, and hence, it is not surprising that the bo, or Chinese cymbals, were already popularized in China around AD 516 - AD 528. It is commonly remembered as two circular discs with red-ribbon handles attached, and its role in operas, folk songs and religious processions is irreplaceable. Currently, orchestral works make use of a large number of different cymbals, including the Western crash cymbals. Common Chinese cymbals include: xiaobo (small cymbals), zhongbo (medium cymbals), shuibo (water cymbals) and dabo (large cymbals).

Possessing no definite pitch, a Chinese cymbal’s pitch runs relative to its size. The small Chinese cymbals are the highest-sounding, whereas the large Chinese cymbals are the lowest. The small Chinese cymbals - also known as xiaocha or chaguo - have a diameter of about four inches. The sounds produced by them are relaxed and crisp; they are usually played in conjunction with small gongs to evoke festive moods. The medium Chinese cymbals - also known as jingbo (operation cymbals) due to their role in Peking opera - are also usually referred to as zhongcha or naobo. These are loud in volume and bright in tonal colour. Relatively thin as compared to other cymbals, the Chinese water cymbals are capable of create husky, metallic sounds. The large Chinese cymbals span eight to nine inches in diameter and possess edges that are slightly flipped up. When hit really hard, these are capable of evoking soul-stirring sounds; when gently struck, the sound produced is chilling. Check out the Hong Kong Chinese Orchestra's introductory videos to assorted Chinese percussion here: